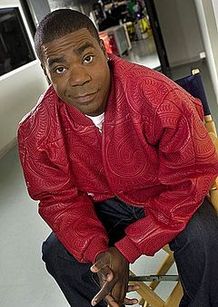 Tracy is being treated for mental health disorder by Dr. Leo Spaceman, a doctor of questionable integrity and qualification who describes Tracy's problems as "erratic tendencies and delusions brought on by excessive notoriety and certainly not helped by my (Spaceman's) highly experimental treatments." Prior to appearing on Late Night With Conan O'Brien, Jordan had reactions to the various medications he is on, causing hallucinations of a blue creature that Jordan referred to as "Blue Man" and "Blue Dude" with whom Tracy takes issue for his apparent lack of feet. Despite his erratic and self-centered nature, Tracy is generally well-meaning. For example, he refused to market a product that could hurt people and is friends with Kenneth Parcell, who considers Tracy his best friend.

Tracy also believes in a variety of bizarre conspiracy theories that assume the existence of shadow organizations or supernatural creatures such as vampires. One of the former (the "Black Crusaders," which includes Lester Holt, Jesse Jackson, Bill Cosby, Condoleezza Rice and Gordon from Sesame Street) seems to actually exist in the show's universe, and Tracy ran away from New York when the group came after him for his embarrassing behavior. When he returned for the Season 1 finale, however, the group member who had been watching him walked away from the set, and Tracy got back to work.

In "Jack Gets in the Game," Tracy reveals himself as the recipient of Key to the City of Gary, Indiana, while reminiscing over a box of keepsakes.

In "Winter Madness," it is shown that Tracy is actually more intelligent than he appears. After learning that he was related to Thomas Jefferson, he took a keen interest in American history. He calls out an actor playing John Hancock on Boston's Freedom Trail that the Founding Fathers did not set all Americans free (referring to the slaves). When Hancock brought in Crispus Attucks and said he met him in 1775, Tracy pointed out that Attucks was actually killed in the Boston Massacre in 1770. In the fifth season, Tracy earns a cab ride to the birth of his daughter by answering trivia questions. He has a large repertoire of knowledge, though it's mainly based on times African Americans have been mistreated, so that he knows when to be offended. In "Lee Marvin vs. Derek Jeter," he claims to have learned the word for black people in every language, including Middle English and "dolphin."

In "Future Husband," it is shown that Tracy is incapable of repeating the same thing twice, one of the reasons he has difficulties as an actor.

According to Angie, the Jordans are both Democrats and supporters of Dennis Kucinich though Tracy was a Republican briefly in 2008.

Since he is now an (apparent) EGOT winner (see "Detailed Work" page below), he plans to have an island like Nicolas Cage, Celine Dion, and Charles Widmore.

Tracy has been married to Angie Jordan for seventeen years as of the 2007 episode "Up All Night," implying that they were married around 1990. He has two sons, named Tracy Jordan Jr. and George Foreman Jordan, as well as a fake son named Donald (played by Michael Benjamin Washington), who is two years older than he is. Tracy and his wife briefly separated at the start of Season 2 but got back together at some undisclosed point afterward. In "The Ones," Tracy claimed that he has never cheated on Angie, and that he only parties with women to keep up his rap credentials. This was finally made public after Tracy's nanny published a tell-all book in "Don Geiss, America and Hope."

Tracy frequently refers to Liz by either her last name or her full name (e.g., "Too late, Liz Lemon!"). It appears at times that Tracy has little or no respect for her or her job, generally only communicating with her when he asks/demands for things to go his way. He also considers saying "Hi, I'm Liz Lemon! I like to wear man shirts! Watch me skateboard! In a high-pitched voice to be a stinging impersonation of her, despite the fact that she doesn't skateboard.

Tracy often loiters around the studio with his entourage of Grizz and Dot Com. Tracy thinks of himself as a mentor to Kenneth Parcell who willingly runs errands for him and puts himself in harm's way to help out Tracy, even though Tracy is often indifferent to the rest of the world. It should be noted, however, that Tracy often helps Kenneth with Kenneth's shyness involving women. Tracy once fired a woman whom Kenneth had a crush on, who began to date Dot Com before Kenneth could ask her out ("Jackie Jormp-Jomp"). Tracy also acted as Kenneth's voice for a date with a blind woman to whom Kenneth was too shy to speak ("St. Valentine's Day") and went out of his way to ensure that as many people as possible came to one of Kenneth's (usually lame and solely Liz-attended) parties. Kenneth may be the only person involved with the TGS show that Tracy Jordan actually cares about. When Tracy quit the show after finding out he no longer needed the money he earned on it, it was Jack's threat to fire Kenneth that changed Tracy's mind in order to keep Kenneth employed ("The Bubble"). Kenneth acted as an asexual, de facto on-set wife to Tracy during his brief Season 2 estrangement from Angie.

Tracy and Jenna have been shown having several disagreements, such as a feud over how much Tracy should have compensated Jenna for her help with his video game ("Do-Over"), or whether it is more difficult to be a black man or a white woman in America (Believe in the Stars). However, they have also had friendly interactions, such as their joint (failed) attempt to help out the crew during "Flu Shot". As seasons have progressed, the two seem to have developed their relationship and bonded over being "the special people". There is an increasing occurrence of the two being involved in shenanigans together - for example, when they try to prove Kenneth is a serial killer, when they drive around the city recruiting funny people of various ethnicities to mess with the audition process for Liz's new actor ("Audition Day"), and when they form "The Problem Solvers."