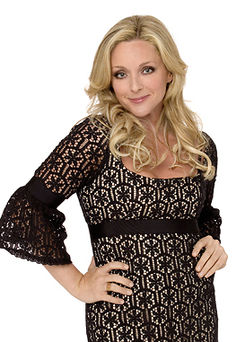 Jenna was born Ystrepa Grokovitz on February 24, 1969 and grew up in Bakersfield.

Jenna's father, Werner (or Travis) Maroney, worked in a fast food restaurant in suburban Santa Barbara before leaving her mother, Verna for a "curly-haired surfer" named Roberta. Jenna maintains she will "always be his little girl." After her father left, her mother made Jenna sit on every mall Santa's lap in Bakersfield in an attempt to find him. She has a sister who urinated in one of her eyes when she was little, which caused it to not open all the way. Another of Jenna's sister (or possibly the same one) has also died. When her half-sister Courtney surprised Jenna on an episode of fictional chat show Vontella (a parody of Maury), they immediately started fighting. Jenna later appears on Vontella for a second time and is told Courtney is dead, but does not not appear upset. She also has a niece named Charlotte who has drawn her pictures which Jenna finds offensive, despite that the pictures are perfectly innocent and childlike.

During Jenna's teen years, her mother moved what family she had left to Florida in search of money, a husband, or "anything she could get her hands on". The high school Jenna attended was located on a boat, which subsequently sank.

Jenna started her singing career when she was young, by singing Christmas carols in Sears, as a distraction while her mother shoplifted. Jenna studied voice at Northwestern University where she first met Liz Lemon in 1993. She also studied at the Royal Tampa Academy of Dramatic Tricks where she majored in portraying prom queens and murdered runaways (mentioned in "Black Light Attack").She has been engaged to a congressman (when she was 16 years old) and David Blaine, and dated O. J. Simpson, a music producer (hinted at having been RedOne), a sniper, and a mob boss.

Jenna's recent boyfriend, Paul L'Astnamé is a professional female impersonator most renowned for his performances as Jenna. They met when Paul was the winner of a Jenna Maroney look-alike contest in which Jenna herself placed fourth. Liz Lemon believes Jenna is attracted to Paul because it means she can love herself.