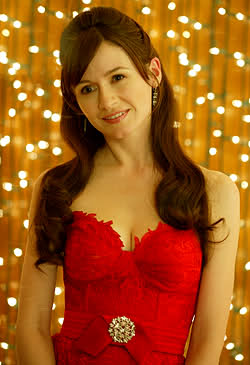 Phoebe is an art dealer and auctioneer who works at the Christie's branch in Rockefeller Center. She is supposedly English and claims to have something called "avian bone syndrome," which requires that no one touch her, as well as vertigo. She always introduces herself to Liz every time they meet, and states that her parents were poets. Jack eventually attracts Phoebe's attention and the two start dating, and after Liz gave the two her blessing, Jack quickly asks Phoebe to marry him and she accepts, stunning Liz. Jack takes Phoebe to Paris, later finding out that Phoebe is actually a gold digger. Liz discovers Phoebe holding hands with an older man, Phoebe tells Liz that he is a former lover. Liz tells an angry Phoebe that either she tells Jack the truth or Liz will, but while arguing with Liz Phoebe accidentally drops her British accent, revealing herself to be American. When Liz tells Jack about this, he refuses to believe her, apparently, having been warned by Phoebe that Liz was making things up about her. When Jack's mother Colleen shows up in "Hiatus," she takes an instant dislike to Phoebe. After Colleen visits Jack in the hospital, she discovers that Jack wasn't in love with Phoebe as his heart rate monitor becomes a emilypolygraph, and Phoebe notices this and slinks away in defeat. Jack and Phoebe's wedding was subsequently canceled. It is never established whether her "avian bone syndrome" or vertigo was real.


Phoebe is portrayed by Emily Mortimer.