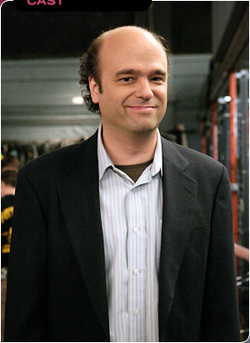 Pete Hornberger is the "sane," quick-witted producer of TGS, who serves as Liz's most trusted friend. He works closely with head writer Liz Lemon, whom, as stated in "Blind Date," he has known for ten years. In the pilot episode, new network executive Jack Donaghy fired Pete without even consulting Liz, but she managed to convince him to hire Pete back. Liz often confides in Pete and, at times, he seems to be the only competent person that she works with and the one who will tell it to her straight when it comes to managing her personal life. Much like Liz, Pete generally plays straight man to the other characters, especially to Liz when she is temporarily pushed over the edge. Pete is married to his wife Paula. They got married in a botanical garden, as mentioned in "Black Tie". Pete goes to great lengths to keep her happy, as in "Up All Night" when he realized it was Valentines Day, which also happens to be Paula's birthday. He has about 5 kids, no ones really sure. There's his son Kyle, who's Pete's afraid of because "he's so strong", his son Kaleb, who he talked with over the phone in "Black Tie", pretending to be Elmo and telling him to "aim his pee pee at the potty". There is also Robert, Jack and unnamed one referred to as "that creepy little one who's always rubbing himself on the carpet".