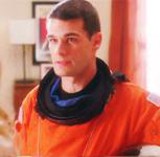 Astronaut Mike Dexter is Liz's fantasy boyfriend that she compares all other men to. She mentions him in several episodes, and he actually shows up in her fantasies in season four. In "Dealbreakers Talk Show #0001", he tells her that he has to go back to space, but "enjoyed the kissing followed by his genuine interest in that TV dance competition." In "The Moms", she reveals that Astronaut Mike Dexter is also the secret King of Monaco. Liz actually meets a man named Mike (although he's a lawyer) who looks exactly like Astronaut Mike Dexter at Floyd's wedding in "Emanuelle Goes to Dinosaur Land". Astronaut Mike Dexter also appears, although not by that name, in Jack's "porn for women", which features handsome men asking women about their day, in "Don Geiss, America and Hope", which Liz is seduced into buying.