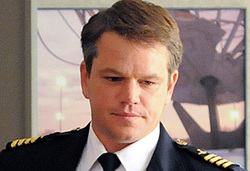 Carol Burnett is a pilot who establishes a relationship with Liz in the season four finale. In season five, the two have a difference of opinion on how serious their relationship should be—Liz likes how casual they are with Carol gone on flights most of the time, but he wants them to become more seriously committed to one another. Despite their difference of opinion on their relationship, they (mostly, but not entirely) have the same quirks and character traits. This becomes a problem factor in the episode "Double-Edged Sword," when Liz and Carol break up, after an extremely heated argument on a plane. His surname is revealed by Kenneth in "Chain Reaction of Mental Anguish" and is a reference to the entertainer Carol Burnett.