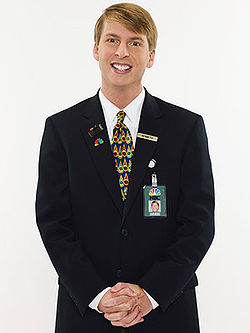 Kenneth is a perpetually cheerful NBC page who carries his mother's middle name, and hails from Stone Mountain, Georgia, where his father was a pig farmer. He exclaims as he passes out from strawberry poisoning in the episode "The Ones" that his real name is Dick Whitman. Kenneth's family appeared to have been in poverty, as Kenneth mentions that the Parcells "have eaten [their] share of Rock Soup and Squirrel Tail" (but also mentions that they've known "lean times" as well). At some time during his childhood, Kenneth's family lived in a militia camp. In "Flu Shot", Kenneth reveals that his family has traditional burials for Parcell men; in which their body is wrapped in a Confederate flag, fried, and fed to dogs. The Parcells also had bizarre intercourse rituals, where if a, presumably, male succeded in getting a mate, they would lay their woman across their Grandmother's lap in the "mating shed" (Kenneth mentions that Albinos would be in there as well, as they are the "Watchers").

After Kenneth's father died, his mother's "friend" Ron moved in. It is heavily hinted that his mother had a sexual relationship with Ron, but Kenneth remains blissfully unaware of this, though it is hinted that he has a great hatred towards Ron.


He considers his mother his best friend, and credits her with his persistent optimism, since she taught him that no matter how bad things seem, there is always someone else having a worse day, "like being stung by a bee, or getting a splinter." At the end of "The Baby Show", it seems as though Kenneth had preserved his mother's corpse à la Psycho, but it is later shown that his mother is alive (the skeleton was a Halloween decoration, and his mother was talking to him on the phone). Aside from being a pig farmer, not much else is known about Kenneth's father, although according to Kenneth in a deleted scene of "The One with the Cast of Night Court", his parents were first cousins (a fact which Kenneth's father kept from Kenneth's mother, since if she knew she would not have married him), and in "The Collection", he tells Jenna that his father died of a heart attack. It is also later established in the episode "Kidney Now!" that Kenneth is the cousin of American Idol 2nd-season runner-up Clay Aiken.

An awkward yet polite rube, he is always smiling, excited and happy to do his menial job, which many people do not understand. He has explained in two episodes ("Pilot" and "The Head and the Hair") that this is because he loves television so much. His love of television and his unending devotion to the NBC network are two of his most defining character traits. For example, he told Pete that he didn't want to "disgrace the peacock" in "The C Word," and, in "Corporate Crush," he was seen knitting a woolen bikini with the NBC Peacock on it for his grandmother. He has stated in "Believe in the Stars" that he only loves two things: "everybody and television." He also named his parakeet after Sonny Crockett.

Kenneth is generally well-liked at NBC, but has a determined nemesis in Head Page Donnie, who forced him to go through a humiliating series of tasks to get a new page jacket in "Rosemary's Baby" and who worked overtime to subvert Kenneth's application to work at the 2008 Summer Olympics in Beijing in the episode "Cooter". In real life, McBrayer and Scheer are friends who have an acclaimed two-man comedy improv show together.

As seen in "Hiatus," Kenneth has a considerably less friendly and more violent cousin, Jesse Parcell, living in Needmore, Pennsylvania.

In "Apollo, Apollo", it was shown that Kenneth sees everyone as muppets. In "Dealbreakers Talk Show #0001", he appeared as a muppet while walking by an HD camera.

In different and numerous episodes, Kenneth is shown speaking different languages. These languages include Mandarin in "Cooter", French in "Flu Shot", German in "Episode 210", and Latin in "Audition Day". This adds to the myth that Ken is older than he looks due to how fluent he seems to be in all of these languages. He can also speak backwards fluently, and in "Kidney Now!", he is shown to be able to talk to without moving his lips. In the episode "Succession", he is able to guess cards with ease, although Grizz doesn't tell him he can.

He is also extremely selfless, as seen in "Believe in the Stars" when Jack trapped him in an elevator with 9 people and claimed there was only enough air for 8 and handed him a pistol, Kenneth immediately tried to shoot himself, and when he found the gun empty, he was willing to allow others to kill him with his own belt before Jack called it off. He had also been seen observing the other cast, and arguing with an unknown entity named Jacob (possibly a reference to thecharacter from Lost) about the good in them, claiming he needs more time, similar to the biblical character Lot.

It also appears that Kenneth is consistently armed, as after giving an improper tour in "I Do Do," he returns his NBC page jacket as well as a pistol to Pete Hornberger, who was ordered by Kabletown to fire him.