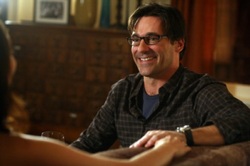 Dr. Drew Baird is a pediatrician and is Liz's neighbor. He first appeared in season 3, when Liz accidentally got his mail, eventually reading it and deciding he was perfect for her, leading her to create a false persona in order to make him like her. Eventually, Liz's scheme unravels, and Drew is disappointed in her; however, he reads her mail and tells her that he feels that Liz would have been someone he really would have wanted to know. Eventually, they agree upon a fresh start. He was recently divorced from a woman named Mandy and has one daughter from the marriage, named Bethany, who is a rebellious teenager who drinks wine and frequently starts fires. Their first date was on Valentine's Day 2009, during which not only did Bethany end up at Liz's apartment, but Drew's mother died in the hospital after being ill. On her deathbed, she told Liz that she was not Drew's mother and that the person Drew thinks is his sister is, in fact, his mother. Liz tells Drew this later in the episode. He also has an aunt named Gloria. In episode 15 of the third season, entitled "The Bubble," Liz is concerned with Drew's behavior, as he is outwardly handsome and unintentionally "manipulates" the people around him (with his looks). Liz shows Drew that this is called "living in the bubble" and shows him that this is not how normal people are treated. When Liz beats him in a tennis match, he becomes angry with his "sore-loser" attitude, and eventually apologizes for his behavior asking Liz if she would like to take a ride with him on his new motorcycle. Liz declines, leading the viewer to believe that the relationship has ended. Drew is portrayed as quite stupid, lacking knowledge of such basic medical procedures as theHeimlich Maneuver.

Dr. Drew appears again in season 4 alongside Floyd and Dennis in a hallucination Liz has after having a root canal. The corporeal Baird appears again in "Emmanuelle Goes to Dinosaur Land" where Liz visits his apartment and learns that Drew's right and left hands were severed on two unrelated occasions, by a helicopter rotor and fireworks, respectively. He hopes to get hand transplants from a strangler facing the death penalty/a woman whose hand got separated from her at a Josh Groban concert. Liz decides he is too imbecilic for her to ever date him again and leaves.

On multiple occasions, Liz has referred to him with the phrase: "So Handsome...so, so stupid!"
Drew Baird is portrayed by Jon Hamm.