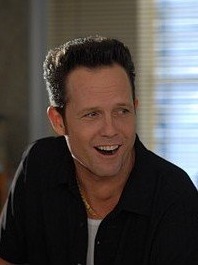 Dennis Duffy was Liz's boyfriend for three consecutive episodes in the early part of the show's first season, also making appearances in the second, third, fourth, and fifth seasons. He is generally disliked by most of the characters, notably Jenna and often Liz. Dennis claims to be the love of Liz's life, which she disputes. The few good memories she has of him are mostly food-related, but she does admit he makes her laugh. His nickname for Liz is "Dummy".

Dennis acts immature for a man of his age, often exclaiming things that would be expected of a teenage boy. In one episode, he is shown sitting on Liz's bed, presumably playing Halo 3, yelling in anger and throwing the controller down, remarking that the controller is "defective" because "That grenade was right next to him!" He was the last remaining beeper salesman in New York City and was known as the "Beeper King" since the original "Beeper King" killed himself. Liz and Dennis first met in late 2002 or early 2003 at a screening of the film The Hours, when they independently said that it should be called The Weeks. They dated for a few months and then broke up. In the episode "Jack Meets Dennis," Liz takes Dennis back when he is the only person who remembers her birthday. He is a very devoted fan of the New York Islanders, stating that he had no reason left to live when they lost a game. Liz asks Dennis to move in with her, although her original intention was to end the relationship. Duffy's behavior eventually pushes Liz to the breaking point when he starts babysitting a Great Dane, despite knowing that Liz was allergic to it, believing allergies are all mental. He destroys one of the walls in her apartment in an attempt to hang shelves and a television, leading Liz to dump him and order him to leave ASAP; however, he objects, stating he loves her and also believes he has squatter's rights. The following day, Dennis shows up with a good-bye note at her job with an apology, prompting everyone to feel sorry for Dennis, even Jack and Jenna. According to his apology, Liz's leaving him marked the first time he cried since the 1986 World Series.

In season 2, Dennis turns up once again when he becomes a hero by saving a person who fell in front of a speeding train. At first, Liz isn't happy he's around, but she is forced to deal with him because Jack wants Dennis featured on TGS. Dennis proposes to Liz, and she realizes that's a bad idea and refuses; Dennis's rude, stupid comments afterwards (together with losing the Stanley Cup) return him to pariah status, and Liz is furious after he tries to push her in front of another subway train to be a hero again, telling him to get lost, but Dennis replies "You'll be back, dummy." When Liz has a pregnancy scare in which she believes she's pregnant with Duffy's baby, Dennis announces that they will deliver the baby at the hospital in Coney Island where he was born and will name the baby Morpheus or Judy.

He now owns a coffee vending machine located in the basement of a K-Mart near Penn Station. He claims to have once almost joined the Marine Corps and took the firefighter's exam, which he claims is biased against Irish-Americans.

In season 4, Dennis appears alongside two other ex-boyfriends of Liz's in a hallucination brought on by anesthesia administered during Liz's root canal. Liz later finds him at a park in Queens, trying to duplicate the balloon boy hoax with a kid he met through a program "that brings together troubled adults with child mentors", and she once again is utterly disgusted and walks away.

Dennis returns in the season 5 episode "100". When a gas leak is seeping into the ventilation system of the sixth floor of 30 Rockefeller Plaza, it causes strange behavior among the personnel. Later, Dennis, whom Liz had called while under the influence of the gas in an attempt to rekindle their relationship an hour earlier, comes to see her. After learning that she will "love" him again if she is affected by the gas leak, he undoes the repairs to the ventilation system. He tries to trick Liz into signing a lease that will let him move back in with her while she is high on gas, but Jack stops her from doing so. Tom the Janitor reports the sabotaged gas line and Dennis is caught and escorted from the set. Liz then tells Dennis if she ever sees him again, she will murder him.
Dennis Duffy is portrayed by Dean Winters.