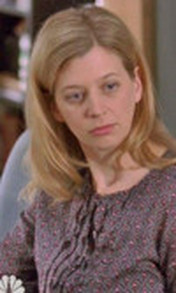 Sue LaRoche-Van der Hout, also referred to as 'girl-writer', is a TGS writer who appears to be fluent in French and Dutch, speaking with a heavy French-Dutch accent. She was the only one offended by the French-Dutch pronunciation of the mini-microwave, the Bite Nuker (which Jack said was offensive to people who identify as Franco-Dutch). In the episode "Black Light Attack", Tracy adds her to his entourage and they develop a relationship mimicking that of an overprotective father and rebellious daughter. She is friends with Cerie and enjoys going to Tasti D-Lite and Pinkberry. In the episode "TGS Hates Women," she appears to be attracted to Abby Flynn, a seductive female comic who joins TGS as a guest writer. In "Plan B," it is revealed that there is a Crime TV show based on her and she appears to be very violent, as she beats up Lutz and breaks Toofer's arm in the episode It's Never Too Late for Now, and it is implied that she murdered the mayor of her hometown.