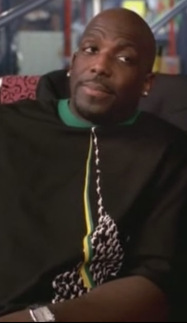 Walter "Dot Com" Slattery is another member of Tracy's entourage. Dot Com is Tracy's driver and cook. It is also in "Hard Ball" that their last names are mentioned. Dot Com is portrayed as an intellectual; he is a 1993 graduate of Wesleyan University, where he once portrayed Boris Alexeyevich Trigorin in Anton Chekhov's The Seagull. He suggests going to Las Vegas to "buy a bunch of sarcophagi" to celebrate the aid of a "de-throned prince of Nigeria," and refuses to join in on Tracy's irrational plan to escape Ridikolous in the episode "The Source Awards." He hopes to one day get an iPhone, because then "e'rybody gon' be jealous." After Jack tells him that his need to be the smartest person in any conversation is off-putting, Dot Com ruefully notes "I guess that's why I'm still single." In "Rosemary's Baby" he revealed he used to be part of Phil Spector's entourage. In "Greenzo", we find out that for some reason he hopes Josh will find them cool and that he and Grizz are the biggest gossips at TGS. Dot Com's father had diabetes and proclaims that he ate whatever he wanted until he "died the day [Dot Com] was born". In the Valentine's Day episode in the third season, it is revealed that Dot Com is in love with Grizz's fiancee. His birthday is September 21. Dot Com is revealed to be just 18 years old in season three, however this could have easily been a one time, non-canon joke.