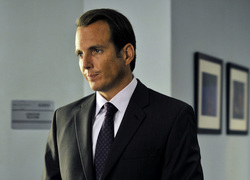 Devon Banks is the former Vice President of West Coast News, Web Content, and Theme Park Talent Relations for NBC. Devon serves as the nemesis of the older Jack Donaghy, and is first seen in the episode "Fireworks", when his surprise visit from Los Angeles leads Jack to believe that Devon is trying to take his job as Vice President of East Coast Television and Microwave Oven Programming. At one point, Devon goes so far as to attempt to cause Jack to have another heart attack so that Jack will look weak in front of Don Geiss, the head of NBC's parent company, General Electric. Upon learning that Devon is gay, Jack sends Kenneth (to whom Devon is attracted) to seduce Devon in an unsuccessful attempt to make him late for an important meeting. Devon is also attracted to Kenneth's cousin, Clay Aiken. Devon becomes engaged to Don's mentally-challenged daughter, Kathy, claiming to have been cured of his homosexuality by the Church of Practicology; this quickly proves to be untrue, as Devon continues to show attraction to men. During Devon's bachelor party, Don Geiss had planned to name Jack as the next CEO, however, Geiss goes into a diabetic coma, and Devon, ignoring Geiss' true wishes, convinces the board to turn over control of the company to the inept Kathy, essentially placing himself in charge. He and Jack concede that they "hate-respect" one another. Devon, desperate to keep the company afloat, explains to Jack that he sold the 'E' from "GE" to Samsung, who is now "Samesung," and reveals that he plans to shut the company down for two years to drive up its profits regardless of the consequences of such actions. Meanwhile, Jack and Liz convince Kathy to hire Jack as a business consultant to oversee all GE affairs. Devon responds by jumping into traffic in order to get hit by a car and sue the driver.

Devon returns in Season 4, having "wormed his way into the Obama inner circle." He becomes head of a committee investigating the incompetence at GE and again attempts to destroy Jack, but Jack undercuts him by accepting a government bailout to keep GE afloat, and presumably the Kabletown acquisition makes Devon's efforts to control Jack moot (at least for matters involving microwaves).
Devon Banks is portrayed by Will Arnett.