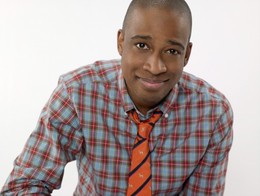 James "Toofer" Spurlock is a proud African-American Harvard University alumnus, and TGS writer, who often butts heads with Tracy and Frank, although he and Frank often hang out along with Lutz. He has an aversion to the stereotypical aspects of black culture that he believes are embodied by Tracy Jordan. His primary purpose on the show thus far seems to be as a foil to Tracy. According to Liz, Toofer is "afraid of black people." According to Jack, his nickname is "Toofer" because "with him you get a two-for-one; he's a black guy and a Harvard guy." Frank, with whom he shares an office, called him a "black nerd" à la Urkel. It was revealed in Season 4 that Toofer was only hired because of affirmative action and he quits in anger before he agrees to return to the writing staff.


Toofer is portrayed by Keith Powell.