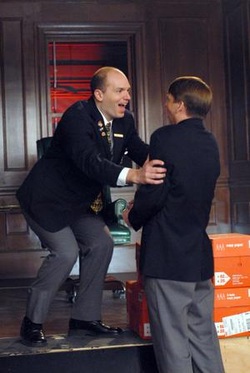 Donny Lawson is the somewhat insane Head Page of 30 Rockefeller Plaza, known for his weak one-liners and bizarre hand gestures. He hates Kenneth because of his excessive cheerfulness and wishes to transfer him to the CNBC network studios in Paramus, New Jersey. Donny is first introduced when Jenna tries to find a replacement jacket for Kenneth and Donny uses this as an excuse to give Kenneth a demerit. He challenges him to a "page-off" (a savage contest mixing physical stamina with NBC trivia), but this is quickly broken up by Pete, who then orders Donny to give Kenneth a new jacket. Later, Donny tries to sabotage Kenneth's opportunity to apply as a page at the 2008 Summer Olympics in Beijing, by sending a memo to Kenneth telling him the applications were due in two weeks, when they were actually that day. After stalling Kenneth with a fake paper delivery, Pete shoots him in the leg with an arrow (referencing his mention that he made it as an Olympic archer, only to have the U.S. boycott the 1980 Summer Olympics), which gave Kenneth enough time to deliver his application.