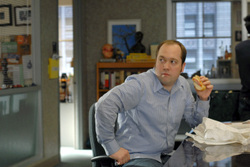 J. D. Lutz is a lazy, overweight TGS writer who is oftentimes insulted or made fun of by the rest of the staff. Often, when characters enter the room to make an announcement, they will yell, "Shut up, Lutz!" even though he Lutz was not actually speaking at the time. The other characters show little concern for his well-being; when Lutz ran head-first into a wall in "The Ones", nobody made any move to help him until a television mounted on a wall fell on him. Lutz is originally from Alaska, where he hated living, and his grandmother recently died. His first two initials were mentioned in the episode "The Aftermath," where it was also stated that he has a thyroid problem. He also mentions that he attended Oberlin College and that after his junior year there he road-tripped to SXSW. The show has strongly implied that he is gay and in the closet, although it also appears that he has made his interest men in clear, and everyone simply ignores or forgets this because they don't like him. Lutz also continues to mention a girlfriend who lives in Canada, named Karen. No one believes him.