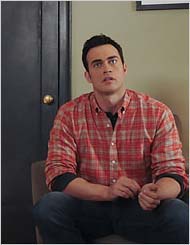 Jack "Danny" Baker is the newest TGS cast member. Danny is originally from Ottawa, and got his start as a robot street performer. When showing up for his first day of work without his silver clothes and makeup he was told his new name was Danny to prevent any confusion with Jack Donaghy. Danny was picked when Jack held open tryouts for the new TGS cast member. He once had a relationship with Liz Lemon, much to Jack's disapproval, as evident by awkward hand prints of the robot make up which can be seen through ultra-violet light. He has deferred to Jenna when his considerable singing talents made her angry and fearful, going so far as to sing badly during a Christmas special so she can step in and shine. He mentions that he has a hard time recognizing sarcasm because Canada doesn't have a large Jewish population, and was shocked to find out that he was adopted even though his mom is Asian and he is Caucasian.