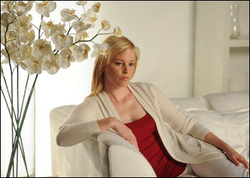 Avery Jessup is a conservative media personality and the host of the political talk-show "The Hot-Box" and commentator on CNBC. She begins a relationship, with Jack in Season 4 when he believes Nancy Donovan will not be divorcing her husband any time soon. He winds up dating them simultaneously, eventually choosing Avery over Nancy, shortly after being told that she is pregnant. Originally from Maryland (but is of Swedish descent), she attended Choate Rosemary Hall and then Yale University. They marry in Season 5 in between the events of "Christmas Attack Zone" and "Mrs. Donaghy", but she doesn't know that the priest married Jack and Liz. However, it has already appeared that this problem has been fixed. She gave birth to Jack's baby in "Double-Edged Sword" in Toronto, making her Canadian-American, and named her Lyddie Elizabeth Donaghy - in honor of Liddy Dole, G. Gordon Liddy, and Jack's martial arts instructor, Li-D; the middle name is in honor of Liz Lemon. In "Everything Sunny All the Time Always", Avery is on a trip described by Jack as, "a hot blondes in weird places initiative," by NBC News in Asia. However, things don't go well, when she is detained in North Koreaby Kim Jong-il and forced to take part in one of his (unrealistic) propagandas involving a Western journalist reporting on how the free world is being conquered by North Korea. Despite Jack's attempts to get her back - including getting help from his ex, Condoleezza Rice - she is stuck in Korea and forcibly married to averyKim Jong-un.