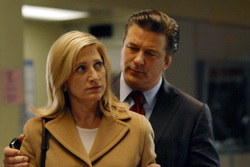 Celeste "C. C." Cunningham is the Congresswoman for the state of Vermont. She is a Democrat. She meets Jack at a cocktail party honouring Robert Novak. Soon after, Jack discovers she is a Democratic Congresswoman from Vermont and she is also trying to sue NBC's fictitious parent company, the Sheinhardt Wig Company, for apparently dumping some "Auburn Fantasy Dye Number 260" into the Chickatagua River which turned the children of Chickatagua orange. Despite Jack and C.C.'s conflicting political beliefs, they decide to pursue a relationship, which is at first kept secret. Jack and C.C. eventually reveal their relationship in Jack's executive dining room. Due to job related commitments, and the fact that Jack lives in New York and C.C. lives in Washington, D.C., they decide to break up. She returns in "Cooter" and approves development of a gay bomb to help get Jack fired from his position in Washington so he can return to 30 Rock, partly because of a favour she owed Jack.