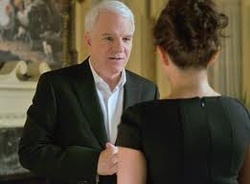 Steven Black was Tracy's manager during season one. He briefly dated Liz during the episode "The Source Awards", but Liz realized that they were completely incompatible after one date. When she attempted to break things off, Steven claimed that she was racist. Liz continued to date Steven, hoping that he would see their incompatibility himself. At The Source Awards, Liz accidentally set off Tracy Jordan's gun, hitting Steven in the upper thigh whilst he was trying to get his phone out of her purse. They broke up afterwards.