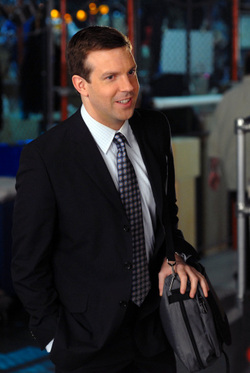 Floyd DeBarber is a lawyer working in 30 Rock. He first appeared when he accidentally sends flowers to Liz Lemon for Valentine's Day, intending to send them to his girlfriend Liz Lemler. Liz Lemon, who doesn't know his name, calls him "flower guy" and develops a crush on him. In the episode "The Fighting Irish," Liz fires Liz Lemler and the rest of the accounting staff, so that she can get closer to Floyd with his girlfriend out of the building; however, Jack cleans up Liz's mess by rehiring the accountants and transferring Liz Lemler to a job at GE headquarters in Connecticut, causing Liz Lemler and Floyd to break up. In the episode "Fireworks," Liz follows Floyd into an AA meeting in order to get close to him, revealing that he is alcoholic and that the rules are important to him, stating that the last time he drank he did a man-on-the-street promo for Tarzan on Ice despite never having seen the show. When Liz lies about being an alcoholic in order to hear Floyd openly talk about his secrets, she finds out that members of the same AA group cannot date and confesses she was never an alcoholic and just had a crush on him. Floyd feels betrayed by this, but Liz makes it up to him by telling Floyd all of her secrets, and the two then begin dating. Jack becomes very good friends with Floyd and starts calling him "the Floydster," much to Liz's dismay. Floyd eventually seems to want to spend more time with Jack than Liz, making Liz a third wheel on their outings with Jack. At the end of season 1, Floyd decides that New York City is too much for him, and seeks to move to his hometown of Cleveland. Liz and Floyd go there on a vacation, where Floyd gets a job and decides that he is going to move there; Liz ends up staying at TGS with Tracy Jordan in New York. Despite seeming perfect for each other, Floyd and Liz break up due to the stress of a long-distance relationship. When Floyd visits New York in season 2, Liz confronts Floyd because she had previously called him in Cleveland and heard a woman's voice. Floyd states that he has no idea who Liz is talking about. Before leaving, Liz runs after him and finds him at the airport and gives him her apartment key, as they "never know what might happen." Floyd appears in season 4, when he, Dennis, and Dr. Drew Baird appear together in a hallucination Liz has after having a root canal, and then again when Floyd arrives in New York to tell Liz that he's getting married. Floyd and his fiancee are trying to get married on The Today Show, which upsets Liz. She takes him to a restaurant in hopes of giving him food poisoning, but he accidentally gets drunk on his alcohol-based salmon sauce. This causes him to go on a binge, and make a fool of himself in front of Liz and The Today Show staff. Liz later salvages Floyd's nuptials, but bonds so quickly with his fiancee that she ends up in the wedding party.