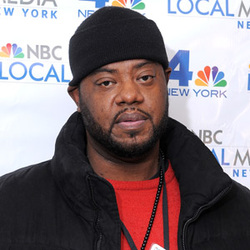 Warren "Grizz" Griswold is a member of Tracy's entourage. The character was a recurring character in the first two seasons and is credited as a series regular in seasons three and four. Within the entourage, he is said to be in charge of sitting on Tracy when he gets overstimulated.

Grizz tends to make unexpectedly emotional observations about the show's proceedings, such as "this is a really special day!", "it's like a rollercoaster ride of emotion in here!" and "look at me, crying like a baby", but not actually showing any emotion. Grizz was entrusted with keeping Tracy's finances in order, until he invested much of his money in WorldCom. According to Tracy he is "obsessed with telecommunications," and might have been in the Navy, though Tracy Jordan was "on a lying run" when he mentioned this. Grizz has also been credited with teaching Tracy about anagrams. He also runs Griswold Talent Agency, which represents Adam West. In "Greenzo", we find out that for some reason he hopes that TGS cast member Josh will find him cool and that he and Dot Com are the biggest gossips at TGS. Liz sexually harasses him at Kenneth's party; the next day Kenneth tells Liz off, stating that before the party, he had "never seen Grizz or Dot Com cry." When alone with Liz, he, unlike any other character, calls her "Beth".

In the St. Valentine's Day episode in the third season, it is revealed that Grizz is engaged and Dot Com is in love with his fiancée, named Feyoncé, but the secret remains concealed (for now) when Grizz and Feyoncé married in the Season 4 finale.


Grizz is portrayed by Grizz Chapman.